The Bees take on the Seagulls in a crucial Continental Tyres Cup match at The Hive London this evening (19:45 KO).

A win for either side would almost certainly send them into the top two of Group B putting them in pole position to qualify for the knockout stages going into the last round of fixtures, so it is set to be an enthralling encounter. Hope Powell was appointed Albion’s women’s first-team manager in July 2017. Powell rose to prominence as a coach in the late 1990s, when she was appointed the first ever full-time coach of the England Women’s team in 1998. She then led the national team to qualification for the 2001 UEFA European Championship finals, and just missed out on leading the team to the semi-finals of the same competition four years later. Her impressive achievements were recognised at Buckingham Palace when she was awarded an OBE in the Queen’s Birthday Honours List in 2002.

Powell led England to a World Cup quarter-final appearance in 2007 – where the team lost to USA – before taking the Lionesses all the way to the European Championship Final in 2009, where they were beaten by Germany. More personal accolades came her way in 2010, as she was awarded a CBE to add to her OBE. Another World Cup quarter-final appearance followed in 2011, and England’s progress on the international scene saw them rise to the highest-ever position of sixth in the FIFA rankings.

Powell took charge of Team GB at the London Olympics in 2012, and ensured England’s qualification for yet another major tournament, the European Championship in 2013. After leaving her job in August of that year, Powell went on to work for the PFA as the organisation’s first female coach educator, to aid the development of future coaches. The former England coach led Albion to a second-place finish in FA WSL 2 in her first season in charge, and led the club into the revamped FA Women’s Super League. The Seagulls finished ninth in the FA Women’s Super League in 2018/19, recording victories over Yeovil Town, Liverpool, Birmingham City and West Ham United.

The state of play: Group B 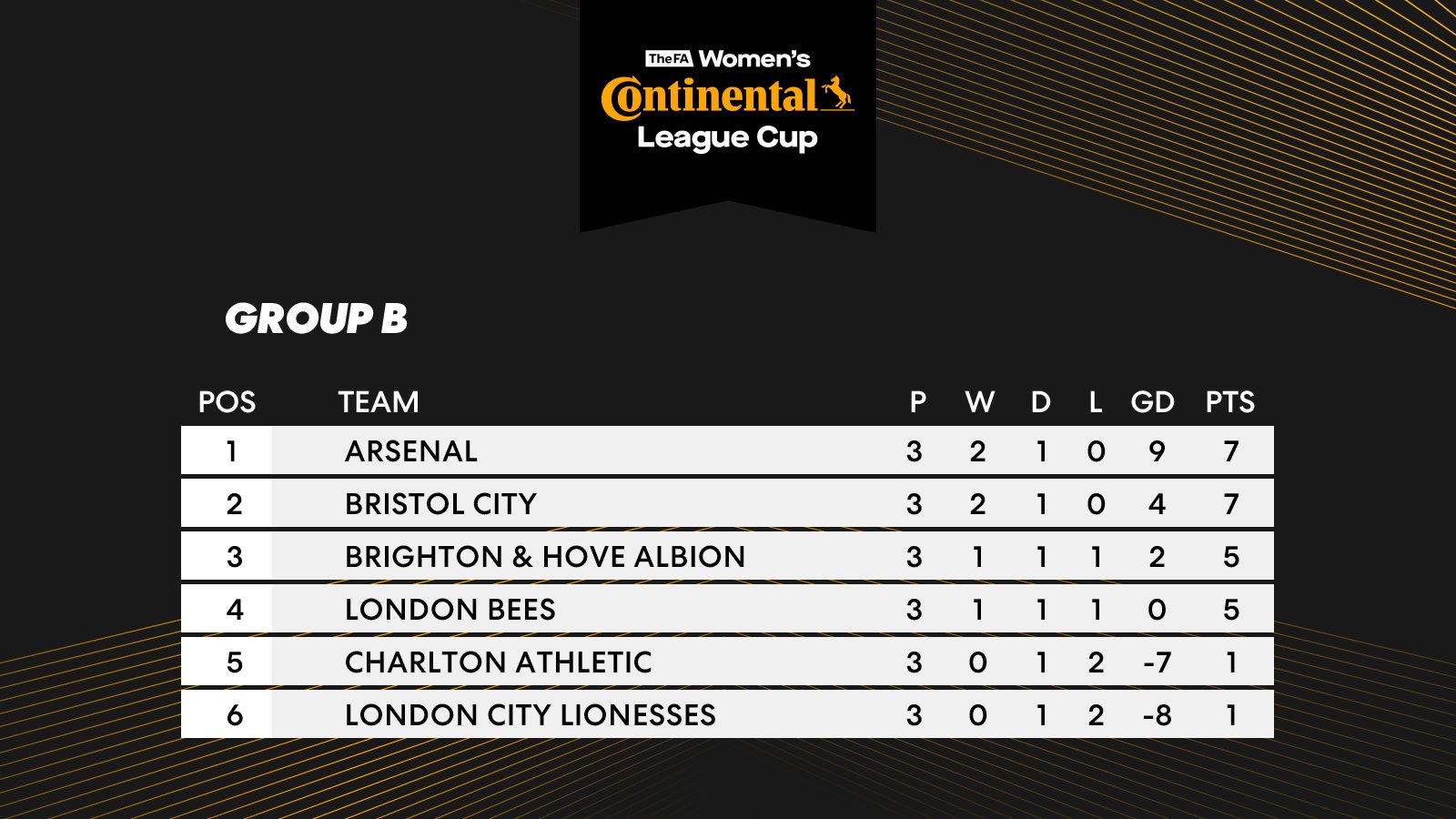 What the bosses said:

“We know Brighton have had a good result against Birmingham on the weekend, so they will come to us in good spirits.”

“They like us are in a good position in the Conti Cup, so we know it will be a really difficult game, they are a professional side who have done well in the WSL”

“This month we take on some really good sides, it’s going to be really tough. But these are the games that you want to be involved in and we will see where we’re at when we get to Christmas”

“It will be a tough and gritty game. Any side you play from the Championship is trying to prove a point, so we have to prepare as we normally would. We must consider it as a big game, and we want to go in with that mentality to get the job done.

“Any team that’s in a lower league has nothing to lose. Arguably we are supposed to win the game, but they will go for it.”

If you can’t make it down to The Hive London this evening, then there will be minute by minute updates over on our official  Twitter account . There will also be behind the scenes content over on Instagram before we bring you all the reaction across our social media platforms.